It was the typical usual morning. Wake up, do some stretching before stumbling out of bed and heading to kitchen for the first of my coffee fix.

Grab second cup of coffee and check in to social media world.  Scrolling through I can see who’s been up all night if there are a zillion posts from them ( sleep people, sleep) I keep on scrolling squinting with one eye pasts the political posts and cheesy memes, blandly go through all the advertisements and for sale ads (unless some cute furniture item catches my eye) smile at the usual real life, real people photos, giggle over some posts that make my day already at the still dark thirty hour, and then, sometimes, something comes along that makes me pause and think… like this one.. 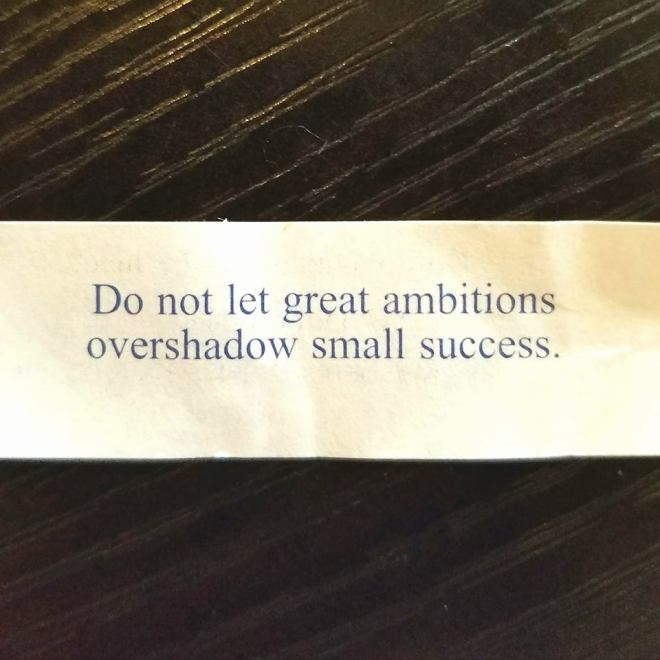 I read it, then read it again. I kinda just let it breathe over me. There are some posts that strike me like that. They make me pause, reflect, look inside and examine it and then consider it’s impact on me.

The person posting it asked what it meant to the reader and was encouraging feedback. Although it was still early in the morning I let my mind engage and began thinking of what it meant to me, how I perceived it and what my take was on that thought.

I am not the only one I pondered, who has had great ambitions or currently has them.

Of course I believe those are largely dependent on the individual too. I mean, my ambitions might not be as big as someone else’s, but then, mine are quite a bit bigger than others.

If we get lost in the pursuit of our ambitions it might be easy to dismiss the small successes that lead us there, right? We could be so single minded and focused on the “big” thing we are pursuing we could stomp right over small successes and never give them a thought, perhaps even not seeing them as relevant.

In general, I think people can be so focused on hitting the goal, they may miss the important things learned on the journey getting there.

Those small things are what grow us, build us, and shape where we go and who we are along the way. If we are moldable, we learn and that shapes us on our way to the bigger things we pursue.

As I pondered those ideas in the early morning hour I started thinking about how learning to run one mile had led to me running more miles until ultimately, several years later I did a race that had 31.6 miles in it.

It took lots of small successes for me to step out and do a 50K.  It took time building my mileage little by little.

I never took it for granted, the privilege and ability of my body to run.

Small success to me meant overcoming things like a desire to stay in bed when it was dark out and I was getting up to go for my long run. Or leaving when it was cold or wet.  Overcoming myself to do bigger things kept me on the path to those bigger ambitions I had.

Similarly, I thought about last year when I made the commitment and signed up for my first duathlon.  There were so many small successes that led to me ultimately not only doing it, but placing first in my age group too.

After my very first training session that was a bike ride, immediately followed by a run, I wondered what I was doing.

It felt awkward. My legs felt like spaghetti noodles the first half mile. I wondered if I was really going to be able to get this thing down.

I did it again the following week and the week after that. Not always fast, not always the most skilled, but I did it. It then turned into a run/bike/run training session.

And I got stronger, not that the training was easier, I was adapting to it.

Small baby steps all the while I was keeping my eye on the prize, that big thing my overachieving self was pursuing. An ambitious goal for a average middle aged female athlete, competing in the race listed as the toughest in the state.

As I continued to sip from my almost empty coffee cup, I thought of so many other things in my life that if looked at in a separate way, might seem inconsequential, yet again they had a specific place in my life for getting me to that “bigger” thing.

I always want to be pursuing something ambitious, something bigger than life that scares me a little. I don’t want to get so comfortable being “comfortable” that I lose the rush of a new dream or vision or opportunity to challenge myself some more.

But I never want to become complacent and unaware of the small steps, the small victories, and sometimes not noticed successes that lead me to the top, for those things pave the road to my accomplishments.

So I’ll leave the same thought with you, that my friend left with me….

How do you personally define this? Do you relate? Do you ever think of the small things as being important to the “big” thing you pursue? Or do they seem unimportant?